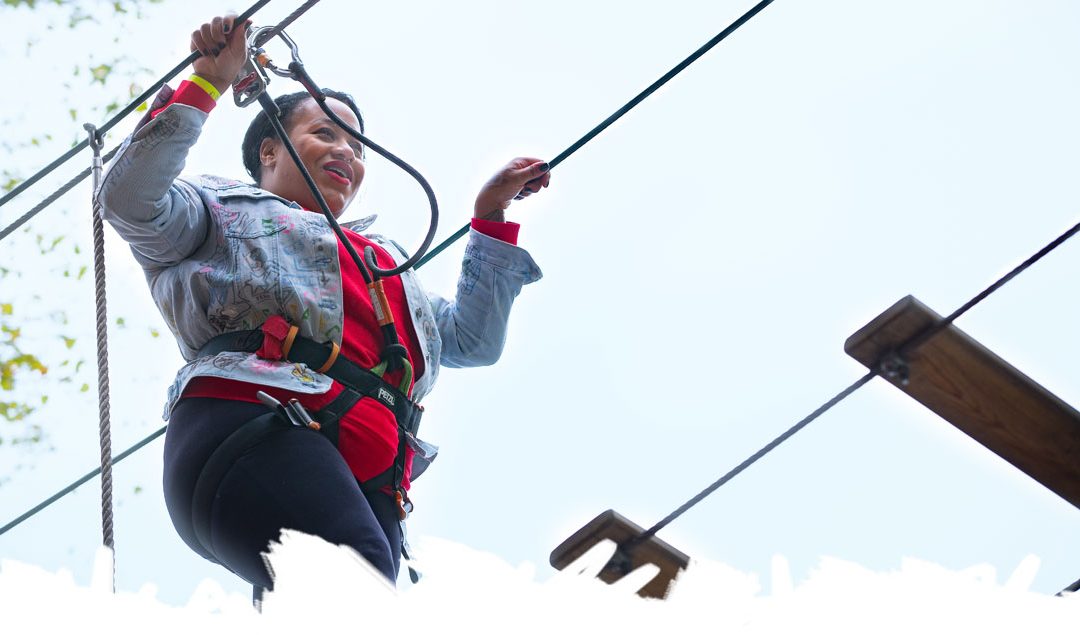 I’ve always been quite cautious. As I’ve gotten older, I’ve become more fearful of the unknown. My fear of flying, public speaking and most recently my fear of heights have held me back from partaking in particular experiences. I often question, what have I allowed myself to miss?

A few weeks ago, I was invited to Go Ape with NatWest along with some other fab bloggers. Strange it may seem, but it’ll all become clear.

We were made to think about our fears and how best to conquer them. It’s easy to discuss ways in which you can get past a mental hurdle; diving straight in? Or practising that fear one step at a time until you’re confident? Nothing beats knocking down a barrier like coming up close and personal and meeting it head-on.

Online banking is a common one. Yes, fear of Spiders, things that go bump in the night and a few others may be further up that list, but none of those has been created to help you out.

As Smart Phones get smarter and online services are becoming the way forward, more and more people are starting to use online banking. But what about those who are unsure? Common fears surrounding online banking are:

Admittedly, even I, social media addict and lover of all thing’s internet-based had some initial reservations when it came to online banking. It took me a while to get comfortable and trust that I was the only one who could sign in.

Passwords are secure, and everything is laid out in memorable locations. However, when any updates would occur, I would be overly cautious and worried. My fear had returned, and don’t get me started on the introduction to the mobile banking app. That was something that I didn’t want to try. I stuck to the friendly, safe and familiar desktop version.

Surprisingly, according to new NatWest research, more than one in ten Millennials (25-34) say they are missing out on the benefits of using apps because they don’t have the confidence or knowledge to use them. I’m not alone!

With the help of a behavioural expert, Honey Langcaster-James, a NatWest Community Banker, Rachel and TechXpert, Charles, today was about conquering fears both online and off. We were going to take a look at NatWest’s mobile banking app and take part in a Go Ape – or “Go App” – challenge.

NatWest has a mobile banking app (app eligibility criteria applies) which is pretty straightforward. Its design is simple, everything is clear and clean, which helps when navigating around the site. Again, I’ve always been quite hesitant using mobile banking apps, so Rachel & Charles were kind enough to talk me through some steps.

We took a look at how to check my balance, transfer money, search for the nearest cash machine, withdraw money without using your bank card using a feature called ‘Get Cash’ (limits apply) and switch between Business and Personal accounts. As I’m used to using desktop versions of online banking, I was hesitant. Possibly the fear of the unknown I’m sure, but Rachel and Charles were there to help.

One particular feature which was new to me was the sending money using your contact’s phone number via a NatWest feature called “Pay Your Contacts.” Honestly, I was blown away. I still don’t understand how money from my account travels through the air, lands on someone’s phone and sets up home in their bank account, but it sure is handy! Digital banking has come a long way, and with a little help, it was made easy. (Just to be aware when using this feature, you have to be over 16 and a payment limit applies).

Conquering one fear that day obviously wasn’t enough. It was time to face another; Go Ape. 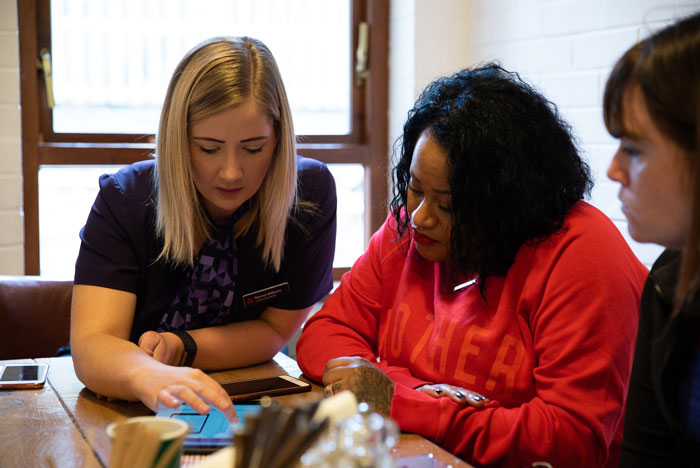 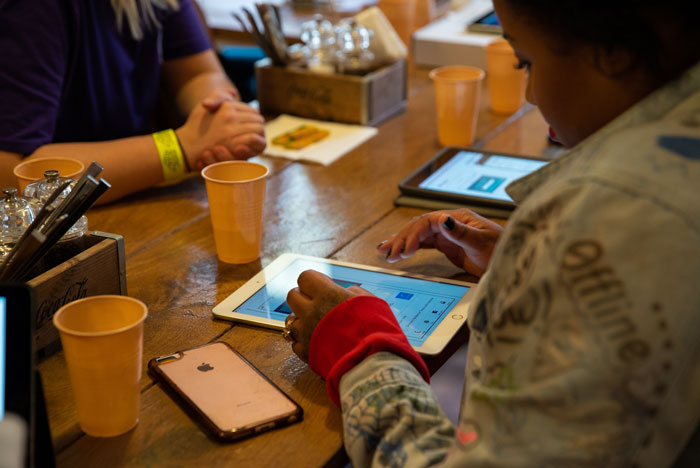 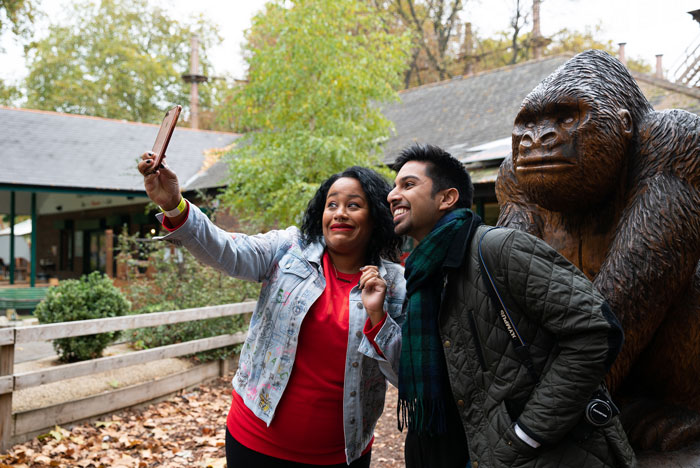 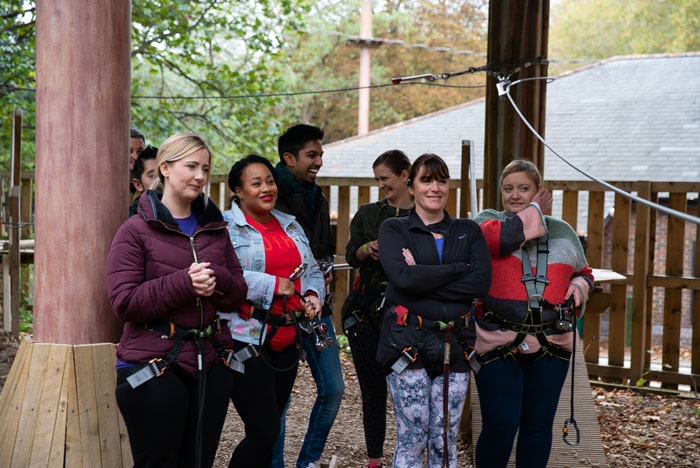 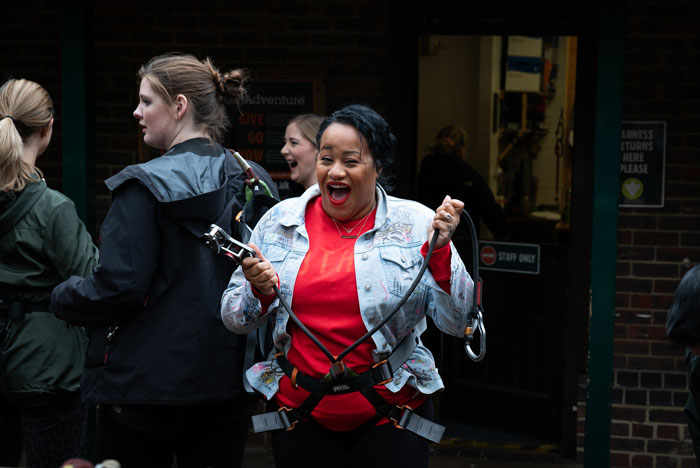 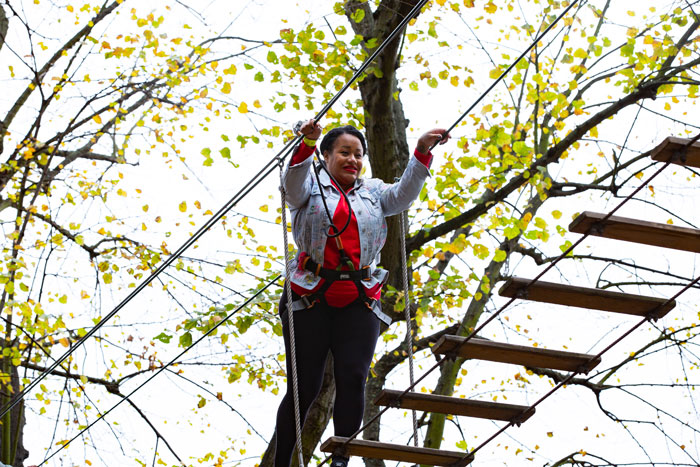 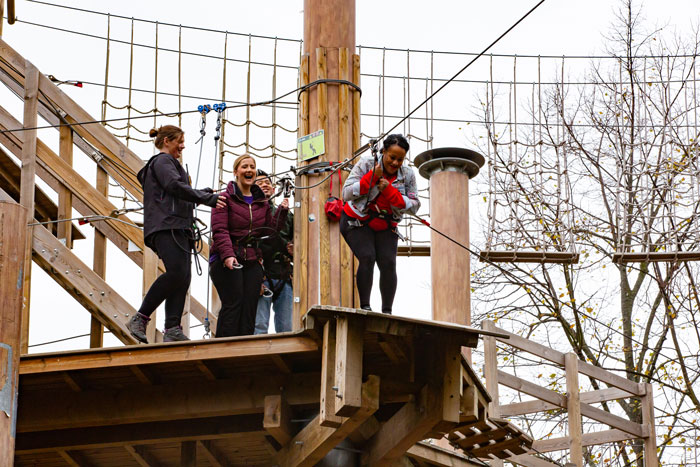 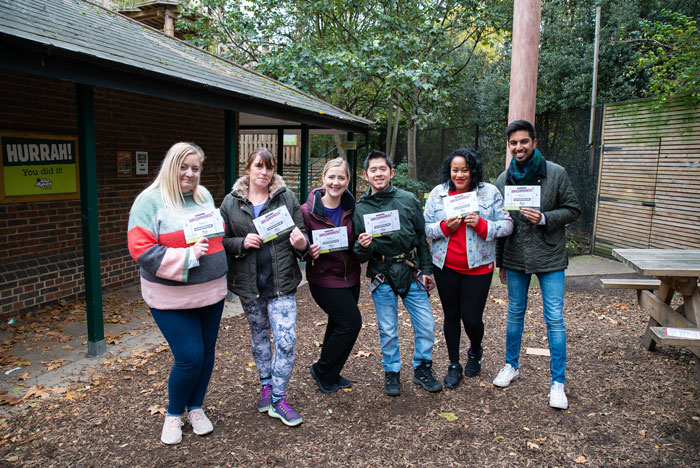 I’m not one for theme park rides or anything that occurs up in the air, so Go Ape was going to be a tough fear to crack.

My heart raced as we stepped into our safety gear and harnesses. Nervous laughter turned into a deadly silence when I saw how high each of the assault courses were. I wondered how the heck I was going to get through this.

Safety talks were completed, and we headed over to practice on the ground before attempting to head up into the course. Although nervous, I was genuinely excited; however, feelings of doubt started to resurface. What if I did something wrong? What if I messed up? But the discussion with Rachel and Charles that occurred earlier on in the day stuck. Even though we were there to talk about online banking, the fears were similar. What if I didn’t know what I was doing? Much like NatWest’s representatives, there were Go Ape staff waiting to help.

We headed up, and as expected, the assault course was pretty high. You could see people below looking up wondering “why the heck are you doing this?!” Under my breath, I replied, “I don’t bloomin’ well know!”.

I tackled the first, it helped that Lynn (@mrsmummypennyuk) and Aftab (@freshandfearless) were ahead. While I cheered them on, I was secretly horrified, to say the least. But I had to keep a brave face to boost their morale. When it came to my turn, they explained their tactics and what might work for me, which made things a lot easier.

As my adrenalin kicked in, the course became fun; it was a personal challenge that I was now enjoying. I had done it; I was doing it, I was conquering those fears. With two fellow bloggers in front and another, Hayley (@Sparklesandstretchmarks) closely behind, we were working as a team.

Stepping on planks that were dangling by ropes in the sky was something that I never thought I’d be able to do, let alone enjoy. Just when my confidence was at an all-time high, it was time to face the deadly Zip Wire. For me, it was like facing a boss at the end of a hard computer game. I had battled the level, and now it was time to beat King-Koopa.

I thought the Zip Wire would have a handle, so you could hold onto a bar above and glide to safety elegantly through the sky. As if you were paragliding. No. Far from it. We could hold onto our safety wire, that was it. The very thing that was keeping us from plummeting 100 feet.

To get to the end, we had to let go mentally. We had to step off of the platform and glide to the other side while holding onto (if you wanted) your wire.

It was at that point I wanted to head back, I didn’t want to do it. But there was something that kept on reminding me how far I’d come. I’d already managed to step through the trees and jump from beam to beam. I had to do it.

I jumped off the platform like I was in an episode of ‘I’m A Celebrity, Get Me Out of Here’, the emotions were overwhelming. I was terrified, amazed, happy, and excited. However, just as I began to enjoy hurtling through the air, fear kicked in. How do I get off without hurting myself? In what seemed like 10 minutes of mental torture, it was over in a matter of seconds. Bum first into a pile of woodchips. Leggings probably weren’t the best thing to wear that day.

I did it. I conquered my fear, and I was alive to tell the tale. Thanks to NatWest and my fellow bloggers, I pushed myself past the point of no return. I was so proud, of myself and everyone who had the same doubts.

Would I recommend this, for sure! Conquering your own fears and knocking down mental barriers can leave you feeling empowered. Facing a fear, with help from an expert or just someone who has been through the experience before can help. When it comes to online banking, Community Bankers like Rachel are more than happy to spend time with you. They are available in selected areas and can meet you at a place that works for you with an iPad for a cup of tea to discuss the best banking options for you (online banking eligibility criteria applies).

Who would have thought a day learning about how to overcome mental barriers around mobile banking apps would teach me so much about myself?

Thank you NatWest, it was a blast.

*Sponsored post, however, all thoughts and opinions are my own* 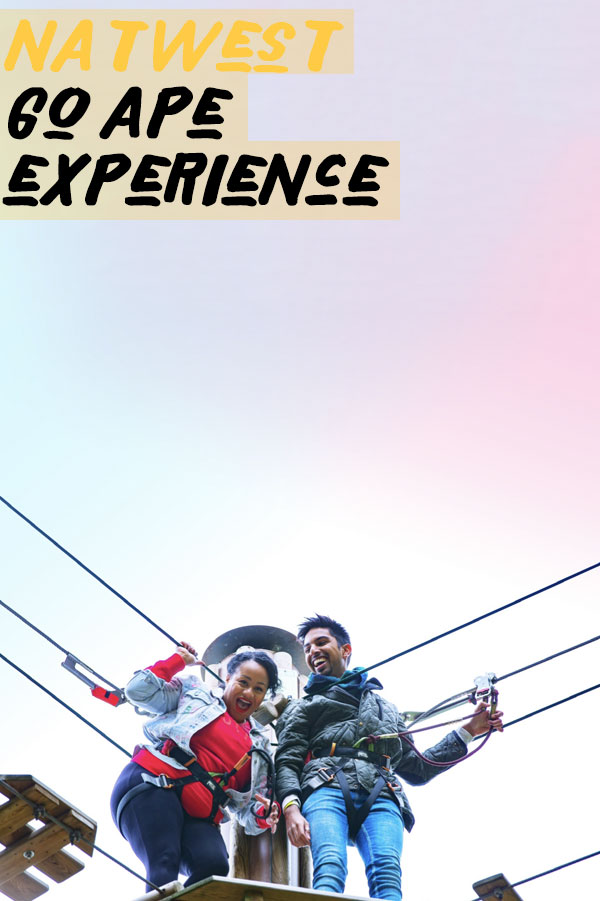