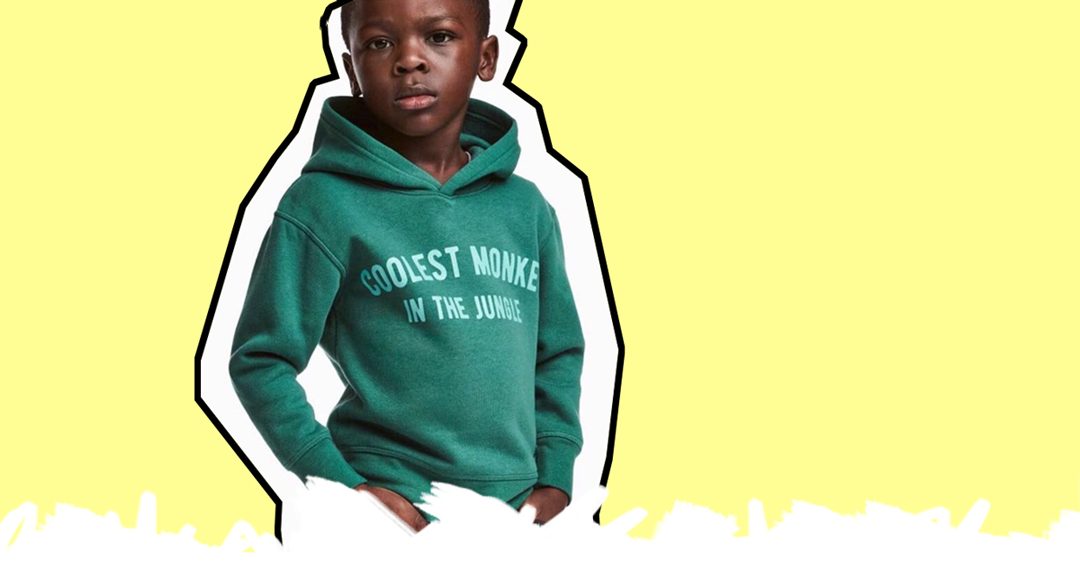 There are two types of people in this world. Those who can’t believe a huge brand such as H&M would place a boy of colour in this sweater and those who have no idea what the issue is.

Firstly, before you get on your high privileged white shiny horse, yes, racism exists and yes POC are still being referred to as Monkeys. ‘Coolest Monkey in the jungle’ would not be a compliment in many, many parts of this world. Whether it’s apparent in your ‘kumbaya-tight-knit-circle’ or not, some of us still find the term ‘monkey’ historically offensive.

Now I’m not going to sit here and blame H&M entirely for this almighty f**k up. Where was the mother? Did they add the statement on afterwards? I’m not here for that; it’s above blaming individuals at this point. The problem is, brands such as H&M don’t seem to have the right types of people high up behind the scenes. Remember those two types of people that I mentioned in my intro? Yep, them. It seems like they only have one type of person okaying these campaigns.

Don’t get me wrong; some brands depict a ‘safe’ form of diversity. You know, that type of easy on the eye family unit; the duel heritage family. They consist of a black dad, white mum and curly haired kids. We’ve seen that type of family for years, and brands like NEXT and GAP are notorious for seemingly patting themselves on the back for doing so.

Recently, there has been a shift, some brands have stepped out of that safe spot. We’ve seen commercials and advertisements being more inclusive or diverse. Here in the UK, we saw a Muslim character in a 2017 Christmas advertisement and an all black family two Christmases back. Unfortunately, half the country lost their shit; it seemed as though some only associate Christmas with all things white. People seem to think that POC don’t represent Christmas, possibly because the media has spoon fed this notion for years, and have only just realised that we are tired of not being represented. News flash haters, Jesus was not blonde with blue eyes, the media just brainwashed you into thinking so. 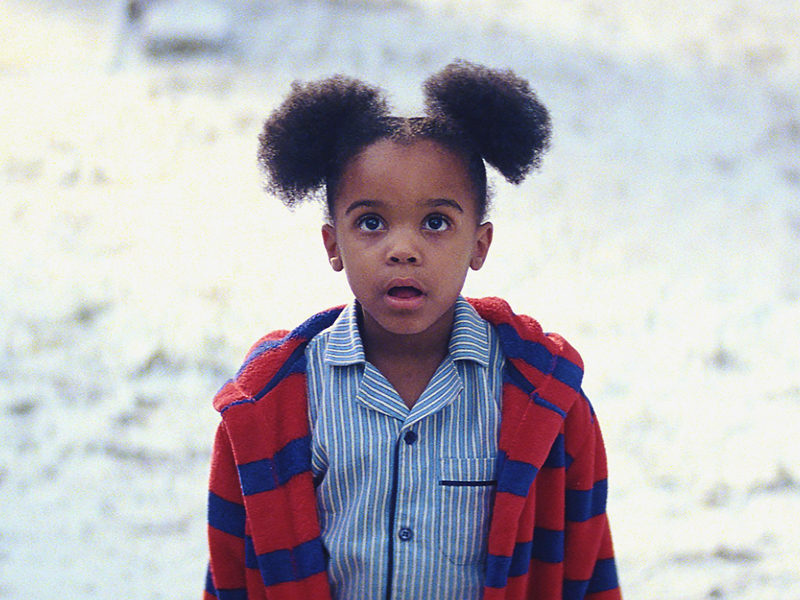 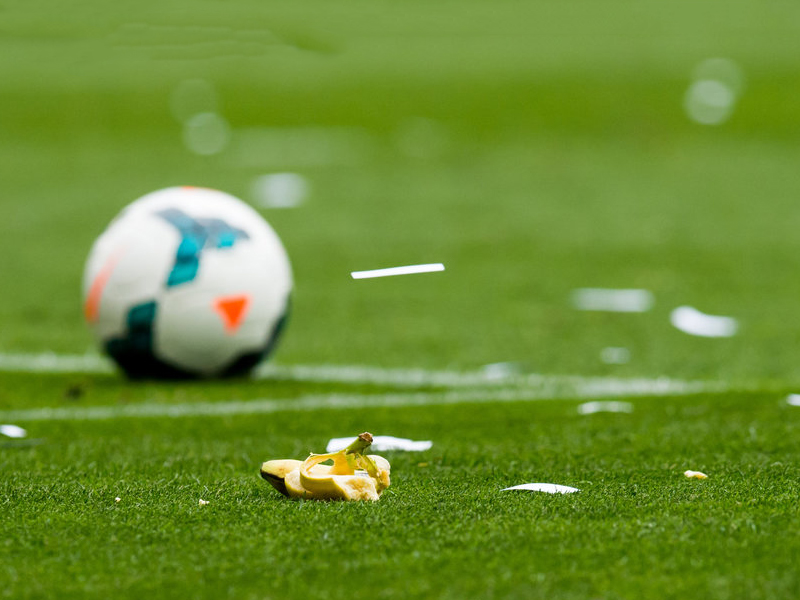 Stepping into this new year, I cannot believe that I’ve already discussed the fact that blacking up, in any form, is offensive. We are now eight days into 2018, and I’m in disbelief that we have to question a seemingly diverse brand. Seemingly, because we see their efforts in the form of brown models and brown floor staff. However, behind the scenes, there doesn’t seem to be many, if any, (sensible) black folk. “Coolest Monkey in The Jungle is a no-no, guys. Stop the shoot, swap the sweaters over. The blonde kid is now wearing the sweater”, crisis diverted and over.

All these companies need to employ some kind of race relations type who is media trained, particularly in Black Twitter so they can say ‘yay’ or ‘nay’. Better yet, “Hells, no! This is a really, really bad idea, guys.” It wouldn’t be hard to find someone adequate, perhaps that lady who wrote that pocket guide would suffice? Dear white people, would ya like to know how to talk to non-whites in the workplace?

I can understand if you’ve never encountered racism yourself, or you’ve never had to prejudge a situation in fear of being stereotyped. You haven’t been called the “N” word, and you’ve never had to ask your mum what “coon” means after a pretty rough day at school. I get it. To you, racism doesn’t exist. You sweet angelic people have been sheltered from the dark uneducated few.

Perhaps you claim to be colourblind, and you think that race doesn’t matter. That’s fine, but don’t continue to dismiss other peoples experiences. Race does exist; we are different, but that isn’t a negative thing. Revel in the fantastic and beautiful differences that we have; listen and learn.

Don’t brush our experiences off by saying that we are too sensitive. It’s not your place to tell us how we should react to historic racial abuse. Just because some things were deemed ok in the past, like Gollywogs, for instance, that doesn’t mean that you have the right to tell us that we shouldn’t care. Sorry to break it to you, your cute lil’ bedtime companion that you held so dearly as a child is racist AF.

I will side-eye anyone who calls my kid a ‘cheeky little monkey’, don’t do it. And for those so-called friends that blacked up as Stevie Wonder and Gloria Gains at that party I didn’t attend…go f*** yourselves. Having a token black friend doesn’t give you an excuse to do and say what you want, you can have black mates and family members and still be racist. Your “get out of being called racist card” doesn’t exist. Racial banter, blacking up, using the “N” word and your old Enid Blyton books are not ok. Even if that black acquaintance who goes out with your friends, sisters cousin says it is, it’s not.

Listen and learn folks, can we finally put this stuff behind us once and for all? I have high hopes for the rest of the year.

*Coolest Monkey in the jungle, please call your mum and tell her that I apologise for all the swearing within this post. In my defence, I’m tired.

**Oh, and brands, get some damn black folks high up in your company so you don’t make this mistake again, thus forcing me to shop elsewhere.

***In the UK, the term POC is offensive to some. I used it in a lazy way to place non-white people under the same umbrella; folks, it’s ok to refer to minority groups as their ethnic titles. Black, Asian and everything in between is acceptable. If however, there are certain words or phrases that you have been using that you now question, here’s a post that may help.

11/01/18 EDIT: After thinking about it, reading comments and responding to people that don’t understand, I’ve decided not to shop at H&M. It’s a shame because I have always loved their clothing and as an ex-employee, I’m really disappointed in their past actions regarding race. (H&M Apologizes For Implying White Models Convey A More ‘Positive Image’).
I’ve always been an advocate for small businesses, so let me put my money where it’s appreciated.

12/01/19 EDIT: I managed to avoid shopping at H&M for a full year, GO ME! I don’t think I’ve ever boycotted something in my life, but I felt it was necessary. During that time, H&M addressed their issues, and I’d like to think someone high up saw this post and decided to take my advice. They created an Inclusion and Diversity Manager role and hired Ezinne Kwubiri to ensure racial faux pas never happen again.

*The bigwigs from H&M have actually apologised for the faux pas, I had to add that because come on, I am fair.