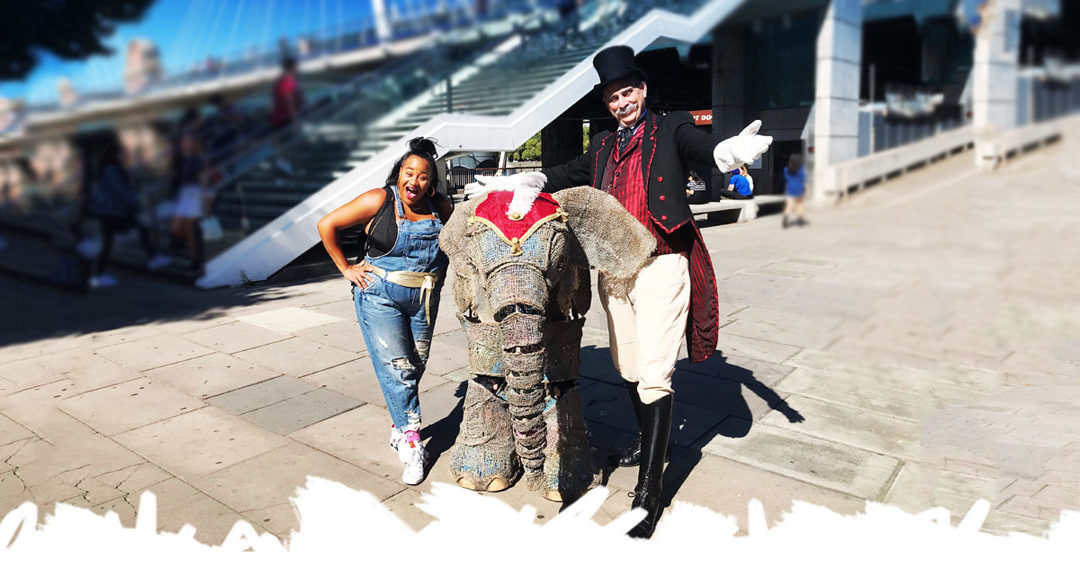 Ok, admittedly it wasn’t a real elephant, but puppeteer Luke Chadwick-Jones had the characteristics down to a tee. Mischievous ‘Peanut’ the baby Elephant was certainly running rings around Circus 1903’s Ringmaster, David Williamson.

Ever played that game, “Never Have I”? I always get it wrong. Are you supposed to have a shot if you haven’t or have done the thing in question?  Either way,  never have I ever been to a circus. I know, it’s mad! I guess I thought my kids were never the right age. One of them was always too young to appreciate it, so we never got around to taking them. This year, however, might be the year, Circus 1903 is in town!

Circus 1903 is a modern take on the early twentieth-century entertainment. When the circus came to town with Elephants, Dare-Devils, Clowns and Freak Shows, townsfolk would gather with excitement. Fast forward to the present day and Circus 1903 has a sense of nostalgia without the negative connotations. The real animals have been replaced by brilliant realistic motioned puppets. And the ‘Bearded Lady-esque’ spectacle has been swapped with some talented contortionists; modern-day jawdropping, politically correct entertainment.

We’ve been told to expect “life-sized elephants stunningly created by puppeteers from War Horse, putting elephants back in the ring as never before”. Acrobats, contortionists, jugglers, trapeze and high wire performers and more, the show will captivate audiences of all ages. I’m here for it.

As rehearsals and stage preparations get underway, I was fortunate enough to grab 5 minutes to have a chat with Ring Master David Williamson and Peanut Puppeteer Luke Chadwick-Jones.

DAVID: Well I’ve been a part of the circus from the beginning. A couple of years ago, we assembled in Melbourne, Australia to put the show together. All the circus acts came from all different parts of the world. At one point, I think there were 14 different countries represented.

I came in because I had experience working with the production company because they also produced The Illusionist; a touring magician group. I was in the cast for that which was on at The Shaftsbury Theatre a few years ago. So when they told me they were putting together a retro, old skool 1900’s Circus with live acts and Elephants, I thought they were nuts! No way are they pulling this off! Sure enough, they did, called me and asked if I’d like to be their Ringmaster.

SARETA: I’ve never been to a Circus before, what type of things would I expect to see?

DAVID: Here’s the unique thing about our show, it’s a theatrical circus. We transport our audience back to a simpler time to 1903 so the first half of the show you see the men pounding in the stakes. You see the acts warming up and the Elephants being groomed and getting ready. By the end of act one, you see the tent being raised and you get the whole experience. You see, the circus coming to town in 1903 was a big event. Schools and factories closed, everyone would come down, it was a big spectacle; the biggest day of the year. Like a Rock concert and Olympics all rolled into one, so we’ve tried to recreate that and give people a feeling of what that would be.

We have award-winning traditional circus acts; they’re fourth and sixth generation circus families, they’re the top of their game. Add the period costumes, the lighting, the musical score; it’s a real theatrical experience. It’s not just going in and sitting on a hay bale, eating popcorn and watching a circus. It’s a traditional, old skool circus with a modern twist, oh, and with Elephants of course!

We’ve brought Elephants back to the circus but in an innovative way; with these incredible puppets. I don’t think people were ready for the emotional response you get from watching these Elephants, I wasn’t prepared! When the baby elephant comes on stage, through the lighting and the mist, people have been moved to tears. The story of the Mother and Baby Elephant is really quite heartwarming.

So that’s what our show offers. Thrills, chills, scary moments, a lot of humour, a lot of laughs; you get the circus experience but in a highly theatrical setting.

SARETA: How did you get the role as a Circus Ringmaster?

DAVID: Well that’s a good question! You know, I’m big, I’m loud and I love people and I love doing magic; I’m a magician and I’ve been a magician for over 40 years. I’ve toured with a lot of different productions and had my own show, and I’ve worked in different places around the world as a magician. Now, they said, you should be a ringmaster! We’ll put a big moustache on you, get you a top hat…
SARETA: *Laughs* It suits you by the way!
DAVID: Do you like it? It’s about to fall off in this heat! I tried to grow one for about 4 months, but I thought, screw it, and blew it off. But I like it *Tweaks tash*.

I love this show, I get kids on stage, 4 at a time, anything can happen!

SARETA: You could say that it’s quite interactive then?

DAVID: OH, Very interactive! I provide the interaction. I’m the only one who really speaks in the show. I’m always addressing the audience, always telling them what’s going on and the story of the circus. But if anything goes wrong, and it does, because it’s a live circus, these things happen, I’m ready to go and keep the show going. Either with a little magic or a little comedy. We don’t have any clowns; I’m the clown!

SARETA: Tell me about the acts, without spoiling. I want our readers to be full of awe when watching the show.

DAVID: We have so many wonderful acts, they all come on one by one so they can truly have their time. It’s a very old-fashioned way of presenting it. Maria, who is our wirewalker, fourth generation Mexican family, said this is like a love letter to the traditions of her family. The people who are cast love the show because it honours the traditions of the circus, it brings the best of the circus and modernises it. I love it. 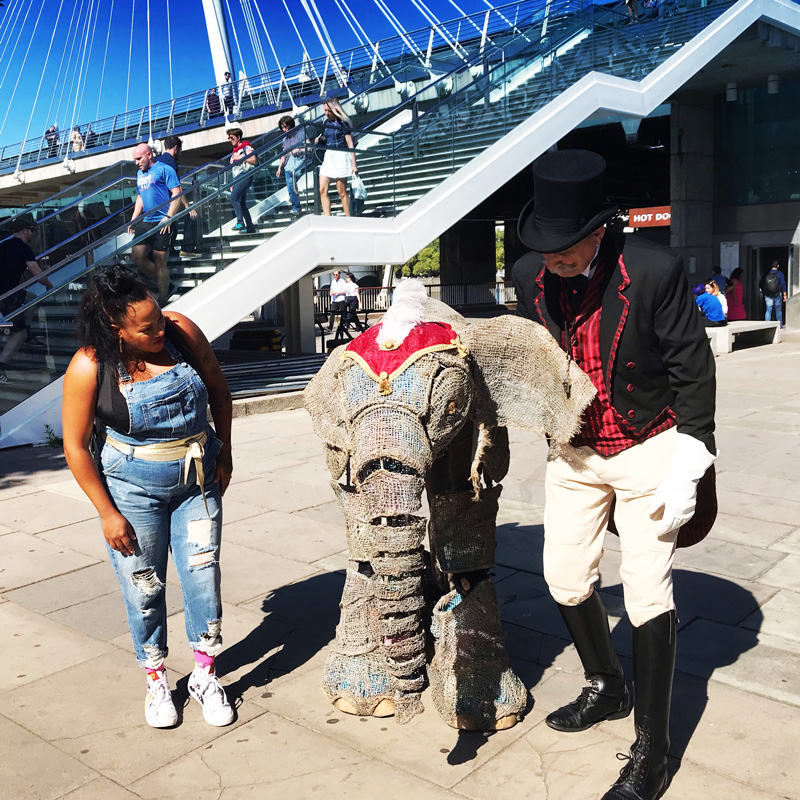 SARETA: Have you always been a puppeteer?

LUKE AKA PEANUT: No, I started as a gymnast and trampolinist and I was competing for about 12 years. I then trained as an actor and combined both physical theatre and gymnastics, and puppetry almost always seemed to be included in the shows that I was in. So my skills all came together in Circus 1903.

I’ve been in the show from the beginning, so when I stepped into Peanut, they sculpted him around my body and feet. I was able to work out the aches and the pains here in London before the show started In Melbourne Austrailia. By the time the show started we worked out what worked and what didn’t work, the creators were brilliant. If we knock the puppets about or break them, they are really easy to repair.

SARETA: You play the character Peanut really well, did you take the time to study Elephants at all?

LUKE AKA PEANUT: Absolutely yeah! We watched a ton of videos and studied how they moved. We actually got to meet an Elephant trainer and Elephants in Taronga Zoo, Austrailia. We got to meet them all one-to-one, it was an amazing experience.

The one thing I was blown away by was how different all of them were. The elephants had so much personality. They all were so cheeky, or flirtatious, or grumpy! I never would have thought I’d meet an Elephant and say, you’re so grumpy! They’re hugely intelligent, emotional, beautiful and majestic creatures. It was amazing to watch.

SARETA: What personality has Peanut got?

LUKE AKA PEANUT: Oh, he’s cheeky, he’s mischievous but he’s intelligent. He’s obviously young, he’s childlike because he’s the baby. He knows what’s going on, but clumsy and a bit ditsy, and I think they based his character a bit on me. I think they were like, you know what, I think you’re probably a bit mischievous, I think you’ll be perfect!

Peanut is a heartwarming, but bumbling character. He comes in and out of the show and likes to try and join in with the acrobats. There’s a beautiful moment in the show, where he gets to meet some kids that we pull out of the audience. It’s nice to see how the kids interact with Peanut.

Expect sensational life-sized elephants and jaw-dropping and dangerous acts from all corners of the globe. Acrobats, contortionists, jugglers, trapeze and high wire performers and more!

The show transports audiences of all ages back to a time when the Circus was the best, and probably the only form of action-packed family entertainment. 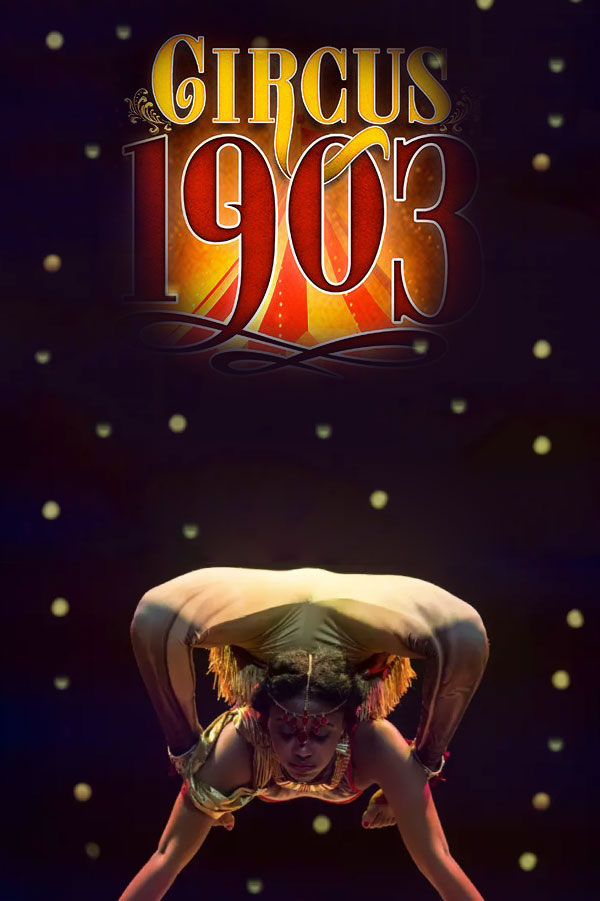